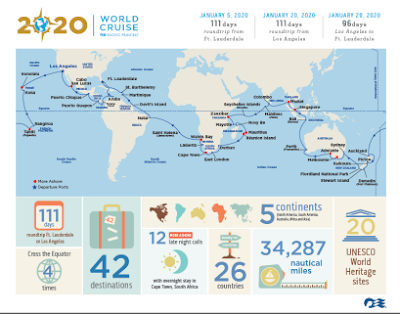 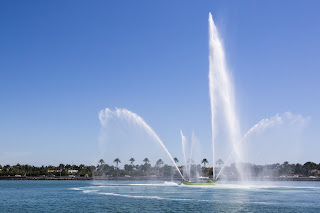 The state-of-the-art terminal is scheduled for completion by the fall of 2019, as Norwegian Encore, the newest ship of the Breakaway Plus class, debuts in Miami with seasonal cruises to the Caribbean.
Read more »
Posted by Jim Fox at 2:04 PM 1 comment:

Cast your cares away on a cruise ship "private island"

Here’s a chance to play “Gilligan” and escape to an uninhabited exotic island far from the hustle and bustle.
No traffic, hustling cries of “taxi, taxi” or “I know what you’re looking for” as the popularity of cruise ship “private islands” grows as a hassle-free day at the beach.
It’s not exactly like being marooned as in the Gilligan’s Island TV show and its doomed charter boat, the S.S. Minnow.

This is chilling out in style with pampered service including all-you-can-eat beach barbecues, bar service – both in and out of the water – sifting sand on pristine beaches and adventures in the aquamarine waters.
Read more »
Posted by Jim Fox at 12:31 PM No comments: 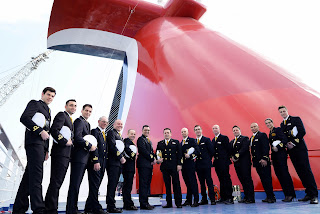 The 3,954-passenger ship repositioned to Barcelona, Spain, where it departed April 2 on an inaugural 13-day voyage – the first of four sailings from the European port.  The ship will then operate a trans-Atlantic crossing before arriving in New York May 23, 2018, for a pierside overnight gala and naming ceremony featuring the ship’s godmother, Grammy award-winning musical artist and acclaimed actress Queen Latifah.
Following a summer schedule of four-day Bermuda and eight-day Caribbean sailings from New York, Carnival Horizon will shift to Miami for a year-round schedule of six- and eight-day Caribbean cruises beginning Sept. 22, 2018. 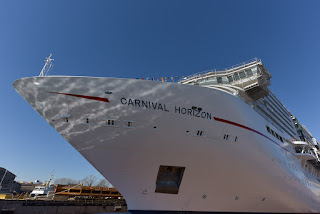 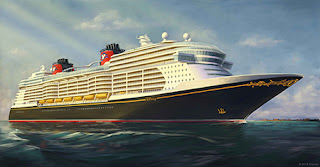 The Disney Cruise Line fleet has the most beautiful ships at sea and the three newest vessels setting sail in 2021, 2022 and 2023 will be no exception. This first, early rendering depicts the magnificent exterior of the newest Disney ships that will elevate family cruise vacations to a whole new level.

In keeping with the distinct Disney Cruise Line style, the new ships will embody the elegance and romance of the golden age of ocean cruising with unique touches all their own.

The new vessels will offer more innovation, new technologies, spectacular entertainment and more Disney stories and characters than ever before.
Read more »
Posted by Jim Fox at 12:48 PM No comments:

VALENCIA, Calif., Apr. 17, 2018 -- Dubai will welcome the most famous ocean liners in the world when the arrival of Queen Mary 2 coincides with the opening of the Queen Elizabeth 2 hotel.

Guests travelling on QM2 will have the opportunity to join VIPs and local media at the opening of the QE2 on 18th April. Future guests will also have the chance to visit when QM2 returns to Dubai in January and April 2019 as part of her World Voyage.

QE2 was launched by Her Majesty the Queen in 1967 and was the Cunard flagship liner (a role she relinquished to Queen Mary 2 in May 2004), undertaking 25 world cruises, crossing the Atlantic more than 800 times and carrying more than 2.5 million passengers. QE2 is owned by PCFC Hotels - part of the Dubai government’s Ports, Customs and Free Zones Corporation and will reside permanently at Mina Rashid, Dubai.
Read more »
Posted by Jim Fox at 12:43 PM No comments:

MIAMI, FL – April 5, 2018 – With service like no other, Celebrity Cruises is raising the bar even further in a first-of-its-kind travel partnership with Forbes Travel Guide. A global authority on luxury service, Celebrity entered the partnership to tap into Forbes Travel Guide’s 60 years of expertise as the modern luxury brand continues to refine its already heralded award-winning guest experience.

Celebrity is the first cruise line to secure a fleet wide partnership with Forbes Travel Guide, and hold itself to the highest luxury service standards in the world, further proving the brands commitment to world-class service.

“Celebrity Cruises has been recognized for its industry-leading hospitality that offers guests personalized, genuine and knowledgeable service unlike any other,” said Brian Abel, Senior Vice President, Hotel Operations, Celebrity Cruises.

“But we’re not resting on our laurels; we’re always looking for ways to continue to improve upon our service, and that’s what we hope to gain from this industry-first partnership with Forbes Travel Guide.”
Read more »
Posted by Jim Fox at 12:40 PM No comments: 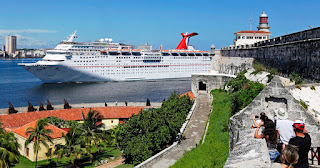 Follows Recently Announced Series of 17 Cuba Voyages Aboard Carnival Sensation from Miami in 2019-20
MIAMI (April 6, 2018) – Carnival Cruise Line has announced it has added another 20 voyages to Cuba aboard Carnival Paradise from Tampa in 2019, complementing the 11 cruises to the island taking place aboard the vessel through next year.
The new voyages aboard Carnival Paradise are in addition to the 17 recently announced Cuba cruises aboard Carnival Sensation departing from Miami in 2019, indicating that more and more travelers view cruising as a great way to experience the destination.
“Our Cuba cruises have been met with phenomenal guest response since we began sailing to the island last year and we’re thrilled to add yet another 20 voyages to this fascinating and sought-after destination,” said Christine Duffy, president of Carnival Cruise Line.
The newly added five-day voyages on Carnival Paradise will depart Tampa on Saturdays and feature a day-long or a full day and overnight call in the Cuban capital of Havana, along with stops at tropical destinations Key West and Cozumel.
Carnival Paradise’s new Cuba cruise schedule includes:
Read more »
Posted by Jim Fox at 12:31 PM No comments: