50 years of cruising in Alaska for Princess Cruises

North to Alaska – go north, the rush is on.
The popularity of Alaska cruising is heating up, far from the beach runs in the Caribbean.
A pioneer in the Great Land is Princess Cruises marking its 50th year with seven ships, new entertainment, shore excursions and culinary offerings to mark this significant milestone.
The first cruise to Alaska departed on June 3,1969 on Princess Italia carrying 525 guests to this “breathtaking bucket-list destination.”
“We’ve spent half a century developing our legacy in Alaska and host more guests there than any other cruise line – more than five million over the last 50 years,” said Jan Swartz, Princess Cruises president.
To celebrate the 50-year milestone, there are “new and authentic experiences, combined with the awe-inspiring beauty” of sailing north.
In the cruise season that continues through mid-September, Princess has deployed seven ships, the largest ever, featuring the debut of Royal Princess.
The cruises range from seven to 12 days and depart from Vancouver, Anchorage (Whittier), Seattle, San Francisco and Los Angeles.
Read more »
Posted by Jim Fox at 2:34 PM 1 comment: 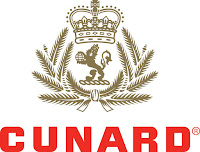 The meeting was arranged in celebration of Zita Cobb and Sandra Greer, this year’s recipients of the Samuel Cunard Prize for Vision, Courage and Creativity and The Innovative Spirit Award, respectively.

The Samuel Cunard Award for Vision, Courage and Creativity was inaugurated in 2015 to celebrate the company’s 175th Anniversary in the ancestral home of its founder Sir Samuel Cunard.