Carnival Breeze to shift to Galveston, Carnival Magic to Port Canaveral in spring 2016

In turn, Carnival Splendor will assume Carnival Breeze’s six- and eight-day Caribbean schedule from Miami May 1, 2016.  Carnival Valor will offer a new series of five- and eight-day departures from Port Canaveral beginning June 4, 2016 instead of October 2016 as previously announced.
Read more »
Posted by Jim Fox at 6:02 PM No comments:

The innovative and interactive hub provides dedicated travel partners with rich content and opportunities to plan their clients’ vacations with more real tools and solutions for better business.
The online resource is a one-stop shop for travel agents, providing fast and convenient access to all the latest information on the modern luxury cruise line’s destination experiences. Travel agents also can learn more about the advantages of booking Celebrity shore excursions, see tour clips and plan their clients’ personalized destination experiences based on their interests.
“The travel agent community is the heartbeat of our business, and ‘The Celebrity Commitment’ is rooted in delivering the best resources to our dedicated travel partners,” said Dondra Ritzenthaler, Senior Vice President, Sales, Trade Support and Service.

Seattle, WA -- Expanding operations across the West Coast of the Americas, small ship operator Un-Cruise Adventures has released its full deployment schedule for 2016 with nine ships offering adventure and river cruises in Alaska, the Pacific Northwest, Columbia and Snake Rivers, Mexico, Hawaii, and new for 2016, the Galápagos Islands and Costa Rica & Panama.

Un-Cruise Adventures’ fleet of boutique yachts and small ships carry 22-88 guests on adventure and river cruises from one week to 21 nights. Adventure activities, tours, and presentations are included.


Devised by award winning Liverpudlian bartender, Joe Wild, the new cocktail A Transatlantic Love Affair takes inspiration from Cunard's spiritual home, Liverpool and the role the company has always played in connecting both sides of the Atlantic - a role that Cunard proudly continues today, offering the only scheduled Transatlantic Crossing on Queen Mary 2.

The 27-year-old who works at one of Liverpool’s most exclusive bars, 81 LTD, explained his inspiration behind his choice of ingredients and his delight at being chosen to create this special cocktail during Cunard’s 175th anniversary year:

SANTA CLARITA, Calif. – A buzz of excitement surrounded the kitchen of King Salmon Restaurant at Denali Princess Wilderness Lodge when a helicopter carrying the season’s first catch of wild Copper River king salmon touched down right outside the lodge.

This special event helped kick off the 2015 Alaska season and guests from around the world were delighted to enjoy this local favorite, served fresh just hours after being caught.
The 2015 Copper River king salmon fishing season opened May 14 at 7 a.m. in Cordova, Alaska, and after a long day on the water fishermen could still be seen bringing in their catch late into the night.

Local processor Copper River Seafoods prepared its first shipment of fish to be flown on an Alaska Airlines jet to Anchorage, where it was loaded onboard an Era Aviation helicopter. The chopper flew to a helipad near the Denali Princess Wilderness Lodge, to deliver the fish to the restaurant for preparation by Chef Jeff Elliott. 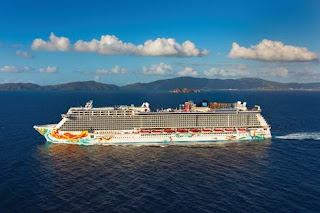 Popular promotion now available until July 31, providing guests with a choice of up to four offers valued at $1,600 for a balcony stateroom

Norwegian Cruise Line is providing guests with the freedom and flexibility to enjoy up to $1,600 per balcony stateroom in added value offers to enhance their cruising experience when they book this summer with Norwegian’s Freestyle Choice Spectacular.

The new promotion is heating up the summer season for all guests who book a new three through sixteen night cruise vacation now through July 31, 2015, providing guests who book any category stateroom with the freedom to select up to four great offers† including a free Ultimate Beverage Package*, a free Ultimate Dining Package*, free shore excursion credits, or a free WiFi package.

These offers are in addition to Friends & Family Sail Free**, where the third through eighth guest in each stateroom can even sail for free.