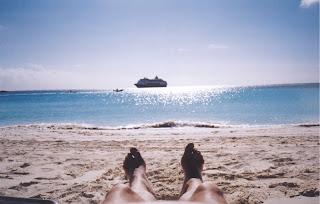 Chilling on the pristine white sand beach of Half Moon Cay surrounded by turquoise Bahamian waters with Holland America's Maasdam at anchor on the horizon. (Jim Fox photo, copyright)
New ship smell, calming sea air attracts cruisers this year
By Jim and Barb Fox
That "new ship" smell and the calming, restorative effects of sea air continue to attract a record number of people to cruise vacations.
There's smoother sailing ahead with the launch of 14 new ships this year and another eight next year while further diversifying global itineraries and shipboard experiences.
"The industry has ridden the economic storm of the past 18 plus months with remarkable resiliency, skill and success," said Jan Swartz of Princess Cruises and Cunard Line.
A survey of Cruise Line International Association (CLIA) travel agents predicts that cruises will outperform other types of travel in 2011 and in the coming years.
CLIA, representing 25 of the major lines, said ships are sailing at full capacity and carried 15 million people in 2010, with a forecast increase of 6.6 per cent this year to 16-million passengers.
Travel agents said cruising has earned the top ranking in consumer's travel interests largely because of perceived value, past cruise experience, price and excitement generated by new ships.

Those 2011 new models
Last year, 12 ships representing an investment of $5.9 billion, joined the CLIA fleet, ranging in capacity from 101 to 5,400 passengers.