Seattle, Wash., July 12, 2016 — Holland America Line celebrated a significant construction milestone today as the first steel was cut for ms Nieuw Statendam, due for delivery in November 2018. The ceremony took place at Fincantieri’s shipyard in Palermo, Sicily, Italy, and the block being built there will later be moved to the Marghera yard where the ship will be constructed. Holland America Group’s Executive Vice President of Fleet Operations Keith Taylor was at the yard for the event.

The 99,500-ton ship — the 15th in the fleet — is the second Pinnacle Class vessel for Holland America Line, joining sister-ship ms Koningsdam that sailed its first cruise in April 2016. The steel cutting follows a period of design and development for the 2,650-guest ship that will feature enhanced Pinnacle Class amenities and innovations. 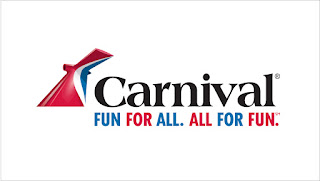 
MIAMI (August 24, 2016) – For the first time, Carnival Cruise Line will offer a 14-day Alaskan adventure round-trip from Long Beach, Calif., in September 2017 featuring seven spectacular destinations, including Glacier Bay, a UNESCO World Heritage Site, and the line’s first visit to Icy Strait Point, an unspoiled wilderness area offering some of the best whale and bear watching in the state and the world’s longest zip-line.

In addition to a full-day sailing Glacier Bay and Carnival’s inaugural call to Icy Strait Point, the 14-day cruise will feature the stunning Alaskan ports of Ketchikan, Skagway, Juneau and Sitka, as well as Vancouver, British Columbia. Each of these destinations offers a rich history and culture, along with awe-inspiring natural wonders, including calving glaciers, magnificent fjords and native sea and animal life. A wide range of exciting shore excursions – from helicopter flightseeing and rainforest canopy tours to hiking, canoeing and kayaking expeditions, and alpine lake snorkeling  – will be available.
Read more »
Posted by Jim Fox at 1:15 PM No comments: 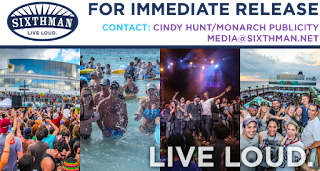 Atlanta, GA – SIXTHMAN — the industry leader in music festivals at sea — is celebrating fifteen years of setting the stage for moments that make life rock, and guests are invited to get in on the vacation action! As the pioneers of the themed cruise experiences, Sixthman tears down the walls between fans and bands, allowing guests to set sail on vacation together with their favorite artists. Beginning today, guests can enter to win one of seven 2017 spring sailings at Sixthman.net/sxmday. Prizes include cabin giveaways for The Outlaw Country Cruise, Turner Classic Movie Cruise, Walker Stalker Cruise, Pitbull After Dark Party, Sail Across The Sun, 2017’s sold-out 10th Edition Cayamo and the sailing that started the music festival at sea movement, The Rock Boat!

On August 30th, the same day The Rock Boat made its inaugural sailing in 2001, Sixthman is throwing open its digital doors and welcoming guests to join them in the celebration. Tune in to Sixthman’s Facebook Page between 10am and 4pm eastern where there will be live streaming meet & greets with the Sixthman crew members, sharing vintage videos and photos and announcing cabin giveaway winners every hour. In addition, hit songwriter and Cayamo alumni artist Chuck Cannon will offer up a special Sixthman Sessions performance live streaming around 2:30pm eastern in celebration of the company’s 15th anniversary.

Designs and Key Features Unveiled For Newest Ship in the Growing Fleet
SANTA CLARITA, Calif. (August 24, 2016) – Princess Cruises today unveiled designs and announced key features of Majestic Princess, the newest and most luxurious ship in the global fleet. Departing April 4, Majestic Princess will sail on her inaugural voyage, a five-day Adriatic Sea cruise roundtrip from Rome with stops in Kotor and Corfu.

Following her maiden cruise, Majestic Princess will tour Europe, offering guests a chance to experience the ship on 7, 14, 21 and 28 day cruises departing from Rome, Barcelona or Athens. A repositioning voyage will depart Barcelona on May 14, 2017, visiting Dubai and Singapore before arriving in Shanghai, her new home. Majestic Princess will begin her first cruise from its home-port in Shanghai on July 11, 2017, carrying 3,560 guests to a variety of destinations in Japan and Korea.