VALENCIA, Calif., March 15, 2017 -- Cunard continues its unwavering commitment to offering guests unparalleled travel experiences with the announcement of Queen Victoria’s refit this May.

The highly revered ship will be taken out of service on May 5, 2017 to undergo thoughtfully designed enhancements costing more than $40 million at the Fincantieri Shipyard in Palermo, Italy and scheduled for completion on June 4, 2017.

The elegance, history and nostalgia of Queen Victoria’s art deco past will remain, while refurbishments will usher this regal ship into a new, updated chapter.

Areas of focus will include the introduction of Britannia Club balcony staterooms and dining for the first time, with a dedicated new restaurant, as well as the refreshing of all Britannia staterooms.

In addition, the ship’s majestic Grand Suites and Deck 8 aft Penthouse Suites will be completely redesigned, and a new Chart Room bar will be introduced.
Read more »
Posted by Jim Fox at 4:36 PM No comments:

She will emerge from a multi-million-dollar renovation with new offerings appealing to families, including Camp Discovery Youth & Teen Center, upgraded Movies Under the Stars, Princess Luxury Bed and interconnecting staterooms, just in time for the upcoming Europe summer and fall Caribbean seasons.

The cruise ship will also be wired for the Ocean Medallion launch that will be available for the 2018 summer Caribbean season. 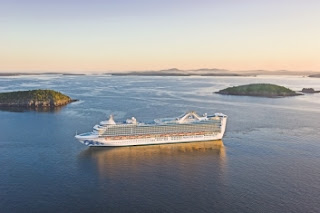 “With new amenities catering to families, Caribbean Princess not only provides comfort and technology to stay connected but enriching experiences that can be shared together as a family or in our new Camp Discovery Youth & Teen Center – all renovated with the goal of helping our guests create lifelong memories,” said Jan Swartz, president of Princess Cruises.
Read more »
Posted by Jim Fox at 4:30 PM No comments:


Cruising to Cuba is more than just a trip to the beach.


That’s because U.S. homeported cruise lines – in order to receive permission to sail to the once off-limits Caribbean nation – must prove these are “cultural and humanitarian exchanges.”


Now that the strict embargo by the U.S. for cruisers has been lifted, Cuba has become a hot, hot, hot destination.


Canadians have freely visited the Communist island nation that’s been stuck in a time warp since the 1959 Cuban Revolution, but not usually by cruise ship.


Now, lines are scrambling to add Cuba to their ports of call.


“Cuba is an island jewel unique from anywhere else in the Caribbean and we are thrilled to have this rare opportunity to take our guests to this fascinating destination,” said Christine Duffy, president of Carnival Cruise Line.


Bob Binder, president and CEO of Oceania Cruises, said there has been “tremendous demand from consumers for voyages to Cuba and our inaugural voyages to the island have been a sell-out success.”


Other cruise lines that have recently announced new or expanded sailings include Azamara and Norwegian.
Read more »
Posted by Jim Fox at 2:46 PM No comments: